Much of human behavior involves achieving survival and then thriving in the environment.  The ability to understand the needs of the human mind and body, and then to initiate fruitful actions to meet those needs is the primary driver of the human will.  All action holds intent, but subliminally, goal-driven behavior dominates the human life.  The intellect is altered to meet those conditions - and these alterations bring about changes in emotional patterns, and behavioral packets that constitute the persona.

All human activity comes from the unrelenting drive shared by all living things: the energy of desire, which springs forth regardless of human intention.  Desire is need-want based, then plan-fulfillment based, and is linked heavily to attention and basic stimulation strata: this forces the overall orchestration system of the human body into a constant state of evolution of desire.  If the nervous system is functioning at full capacity, no condition remains fully the same permanently.  Thus, in the human attempt to gain stability and living stasis, we are sort of forced to enjoy or endure emotional evolution no matter what.  The behavioral patterns associated with this constant evolution are remarkable but simple: these patterns all relate to the assessment system held in the human psyche.  The on-flow of desire straddles several conditions that are paramount to human existence:

These conditions are predictable in many ways, and every outreach of the psyche into each stage of these conditions creates a modular evolution cycle that imposes itself upon the condition of desire itself.

The image I am about to present holds these conditions in their patterned framework.  In this image each star holds one of the conditions in cycle.  In the most extreme condition of worldly social isolation, with motivational stressors in place, a person could almost watch their condition evolve daily around the complete circle.  There are many conditions we can discuss, but first let's view the image: 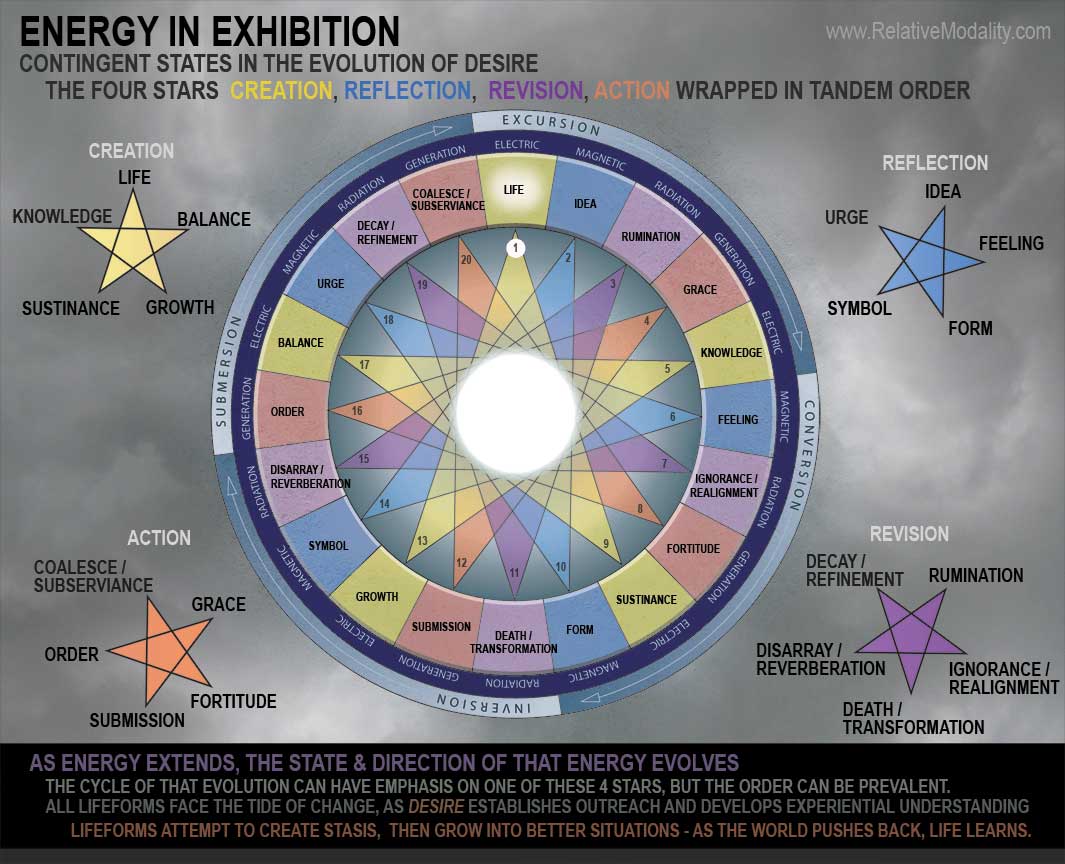 In every moment, the energy of will, of life springs forth from living beings.

This "Energy in Exhibition" wheel contains one experiential cycle.

Energy can exert itself in many ways, but there is a primary theme of goal orientation in the manifestation of will. All goals require change in forward conditions.

For human beings, energy can express evolution patterns in:

However, these three sets of expressional change are based on the conditions put forward by all life-forms experiencing change, and the forced condition of will and desire exhibited by the condition of life.

A complete example of this chart, the ENERGY IN EXHIBITION, is as follows:

In more extreme conditions, the entire cycle of the ENERGY IN EXHIBITION can be perceived, and even experienced with great turmoil.

The more stable the condition of the life-form, the less negative aspects are felt.

In stable conditions, when individuals can thrive, and harbor positive development over negative attributes, the psyche can potentially soar, experiencing the best and strongest attributes of this cycle with great potency.

The more empowered the being is, and the more situated the expression patterns are, the more stable the experience becomes - this can lead to a full cycle being felt on primarily one of the stars, such as the CREATION star that consists of Life - Balance - Growth - Sustinance - Knowledge, and around it goes.

The more change is being sought, the more the 'negative' aspects can be felt, though with desired change and positive attitude, these hardships can be accepted and suppressed with the replacement of a sense of personal challenge and fortitude throughout the process. In such an example, two stars such as the yellow CREATION star and the red ACTION star may be more pronounced.

In great conditions of personal reflection or mental creative states, it might be possible that the blue REFLECTION star and the yellow LIFE star are more pronounced.

In conditions of extreme loss, or mind-altering reflection that includes wanted or unwanted personal change of extreme character shifting - the purple REVISION star might take prominence, and the negative aspects even can dominate, and such an example would make it very hard to feel the yellow CREATION star at all, such as with depression. In such a case, the red ACTION star would face eminent challenge, and the blue REFLECTION star might produce moments of calm, but lack energy and exuberance at all turns.

ENERGY EXERTS ITSELF, through the personality, the mind, felt emotions, and in the world around ourselves as we gather bearings on the challenges that surround us. All life-forms must coincide with necessarily challenges, and also, with the internal drives to become something better or more capable in the world. Every time we rest, we allow the energy inside us to ease, but expression of energy will occur again no matter what. We must guide this energy in our daily processes, and there is a governing rule of reality, a natural law that we must never forget: The energy of the current moment will change, and that change is limited by the current predicament, it is up to us to manifest the best possible outcome, and to seek balance and equilibrium even though life does not always provide conditions that enable that balance to exist for long.

The human life is a life of reflection, action, predicaments, ideation, and manifest reflexes. - we change, learn, and grow throughout these processes. We also endure the problems, and change sometimes for the better, and sometimes for the worse. For those that seek progressive enlightenment, it's required to rise above, let go, achieve equilibrium on one of these stars of consciousness somehow, as the show rolls on.

One of the greatest ways to manifest positivity in the negative conditions is to create conditions of empathy and compassion. In states of suffering, the human mind can gain tremendous strength in the capacity of the greater mind that instills the universe - In your weakness there is strength, because in compassion there is love. The active daily state can become so consuming it will lead people to become forgetful of anyone but themselves.

As we will see in the charts to follow, the human being is not capable of the greatest states of consciousness without awareness of the whole human predicament - a great challenge of understanding - because life is incredible and thus consuming of our attention, but also so challenging, that we can have little energy to consider anything beyond the challenges before us.